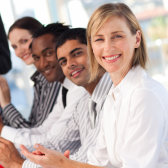 David joined the OUB team in 2010. He is originally from Tupelo, MS but has called Oxford home since 2003. After receiving a degree in Banking & Finance from Ole Miss in 1988 he went on to graduate from the Graduate School of Banking at LSU in 1997. Locally David is a member of the Rotary Club, Oxford-University United Methodist Church and also helps with United Way. He is the past Chairman of the Oxford-Lafayette Chamber of Commerce. David is married to Katie Rose Guyton and they have two children, Matthew & Mary Arden, who attend Ole Miss.

Brad joined the OUB team in 2010. He is a lifelong resident of the Oxford/ Lafayette County community and is a graduate of Lafayette High School. After high school, Brad received a degree from The University of Mississippi in Business Administration with an emphasis in real estate. He later went on to graduate from the MIssissippi School of Banking in 2008. Brad is a current County Chairman with the Mississippi Young Bankers Association and has served as past Councilman on the MYB board. Brad currently serves as the Vice President of the LOU Ole Miss Club. Outside the bank Brad can be found hunting or attending one of his children's youth sporting events. He is married to Toni Vick Ewing of Oxford and together they enjoy spending time with their family and attending Ole Miss sporting events. They have three children - Carter, Sara Bradley, and Cooper. Come see Brad today for all your commercial loan needs.

Audra joined as one of the original OUB team members in 2000. She is originally from Ashland, MS and commutes to Oxford daily from Water Valley, MS. Audra has received numerous degrees over the year including Ole Miss in 1998 and the LSU Graduate School of Banking in 2009. Outside of the bank Audra enjoys shopping and reading and supporting her children while they are involved with football. She is married to Broderick Cook of Water Valley, MS. They have three children - Marquette, Marley, and Marquis. Audra plays a very important role in the bank's day to day operations and continued success.

Heather joined the OUB team in 2002. She is originally from Water Valley, MS and continues to live there. Heather attended the University of Mississippi and graduated from the Mississippi School of Banking in 2007. Outside of the bank Heather enjoys traveling and reading. Heather is here to assist you with all of your Internet banking questions.

Tyler joined the OUB team in July of 2014. He is originally from Southaven, MS but moved to Oxford in 2011 and earned a degree in Banking and Finance from Ole Miss in 2014. Outside the bank you can find Tyler hunting or enjoying an Ole Miss sporting event. Tyler is active in the Oxford Chamber of Commerce where he serves as an ambassador. Come see Tyler for all of your consumer loan and banking needs.

Martha has been with OUB since 2005. Martha met her husband at Ole Miss in 1982 and they moved back to Oxford with their three children in 2000. Growing up in a military family, Martha lived in many places but since her father grew up in Oxford, she has always called it home. Martha worked in the customer service department before moving to loans and is always happy to help our OUB customers with any of their banking needs. In her spare time Martha enjoys books, movies and spending time with her family.

Alison joined the OUB team in 2013. She received her degree from Ole Miss in 2009. Outside of the bank Alison enjoys fitness, traveling and taking her dog on long hikes. Alison worked in the customer service department before moving to loans and is always happy to help our OUB customers with any of their banking needs.

Amanda joined the OUB team in 2015. Although Water Valley is now home, she is originally from Camden, AR. She is married to Water Valley native, Trey Lowe. Together they have one daughter, Mary Jane Lowe. They are active members of Campground Baptist Church. In their spare time, they enjoy spending time with family, being involved in the community, and socializing with friends. Amanda is the branch manager for the Main Office on University Ave in Oxford. Come see Amanda for all your deposit account needs.

Laura joined OUB in 2016 after spending many years in the insurance industry. She is originally from Birmingham, AL but has called Oxford home since 2008. Laura graduated from The University of Mississippi in 1995. She is married to Neal McCready and they have three children - Campbell, Caroline, and Carson who keep them busy with soccer, dance as well as other activities. She is also a member of Oxford-University United Methodist Church.

Kalaila joined the OUB team in 2015. She is a 2006 graduate of Water Valley High School. After high school, Kalaila received her journalism degree from the University of Mississippi. Kalaila serves as the OUB ambassador for United Way and community service admin. Outside of the bank Kalaila enjoys Ole Miss football, tailgating, traveling, and attending her daughter, Khloe activites/school events.

Rita joined the OUB team in 2014 with years of experience in the banking industry. She call Lafayette County home and resides in the Paris community. Rita is married to Ray Mottz. They have two children and four grandchildren. Outside the bank Rita loves spending time camping or going to the races with her grandchildren.

Wanda joined the OUB team in February of 2018 after having worked for a local attorney for 34 years as office manager/loan closing manager. Wanda moved to Oxford as a child and has lived here ever since. She is married to Billy Lamb and they are the parents of one son, who is deceased. They have one grandson. Wanda is an active member of First Baptist Church-Oxford and volunteers at The Pantry. In her spare time, Wanda likes to travel and spend time with family and friends.

Kim joined the OUB team in 2019 with three years experience in banking. Originally from Paragould, AR, Kim grew up in Water Valley, graduating from Water Valley High School in 1982. She has lived and worked in Oxford since 1987. She has one daughter, Shannon. Outside the bank Kim enjoys gardening, raising chickens, and beekeeping. Stop by the Jackson Avenue location and see Kim today.

Latoya joined the OUB team in 2019 as a Branch Manager. She is originally from Abbeville, MS, but has lived in Oxford since 2007. She is a graduate of Lafayette High School, and also received a degree in Business Administration. She enjoys reading, traveling, shopping, but most of all I love spending time with my family.

Grant joined the Bank of Pontotoc in 2009. He has lived in Pontotoc his entire life and is a graduate of South Pontotoc High School. After high school Grant received a degree from Ole Miss in 2011 and also attended Itawamba Community College. Grant is very involved with the local Fellowship of Christian Athletes as well as the Pontotoc Chamber of Commerce. Grant is also a memeber and a deacon of Reynolds Chapel Church. When Grant isn't at the bank he can be found in the woods or at the golf course. He is married to Deanna Peel Reynolds of Pontotoc and together they enjoy going snow skiing. Come see Grant today for all of your consumer and commercial loan needs.

Dena joined the Bank of Pontotoc in 2012. She has lived in Pontotoc her entire life and is a graduate of South Pontotoc High School. After high school, Dena received a Business Administration and Accounting degree in 2008 from Ole Miss. When Dena isn't at the bank she enjoys watching Ole Miss Football games and having back porch bonfires with friends. She is married to her husband, Wesley, and together they enjoy going to drag races at the local tracks and spending time with their little girl, Zada. Call or stop by the Bank of Pontotoc today and let Dena help you with all of your banking needs.

Virginia joined the Bank of Pontotoc in 2010. Pontotoc is her hometown and she could not imagine living anywhere else. Virginia is a 1999 graduate of Itawamba Community College. She is married to Tommy Crawford and together they enjoy cooking and watching movies. She is an active member of Pontotoc Second Baptist Church where she sings in the choir and is a youth leader. Outside of the bank, Virginia enjoys reading a good book on the beach and spending time with friends and family. Locally, she is involved in VITA (Volunteer Income Tax Assistance) and the food pantry. Stop by today and let Virginia take care of all your banking needs.

Bruce joined the Bank of Pontotoc in 2018 with 9 years of banking experience. He and his wife Amber have one son, Collin. Bruce is a 2011 graduate of Blue Mountain College with a Bachelor of Science in Business Administration. He is also a 2013 graduate of the Mississippi School of Banking, and is currently enrolled in the Graduate School of Banking at LSU. Most of his free time is spent traveling, watching sports, hunting, and working on his family's farm

Suzanne joined the Bank of Pontotoc in 2017 as a teller. She is a lifelong resident of Pontotoc County and a graduate of South Pontotoc High School. In her free time, Suzanne enjoys going to the movies, beach trips and spending time with family and friends. She has two children, Andy and Alex. Stop by and let Suzanne help with your banking needs.